Beer at the Finish Line

I must admit that not much KIP happened for me on WWKIP Day. We rode 12+ miles on the hottest day of the year (so far). And although the scenery was awesome and the ride itself was great fun, I was totally beat by the time we made it to the finish line. Where, mercifully, they had—in addition to more of the cold water and gatorade we’d enjoyed at the rest stop—a couple of kegs of ice-cold, locally-brewed beer. Nothing has ever tasted so good. (Okay, it might have been tied with the store-brand Oreos they had at the rest stop!) We found a shady spot, collapsed in a heap, ate a few hot dogs and hamburgers to go with our beer (the kids got more water, since I was the hydration police), and tried not to think about the fact that we were going to have to get back on our bikes to return to the parking lot. My kids were real troopers, though. My son did his fair share of complaining, but he hung in there until the end (and being a kid, had a lot more energy on the home stretch than I did!), and the little one proclaimed, “I wuv bike wides!” (of course, she didn’t have to do much work, since she’s still in a seat on the back of Daddy’s bike).

I was too tired to even dig out the little WIP bag that I’d stuck in my bicycle basket before setting off, nestled beside extra bottles of sunscreen and water and spare tire inner tubes. At the last minute, I pulled out the sock I’d originally planned to bring and stuck in the Pinkerton Shawl that I’d started a year ago in some lovely Malabrigo sock yarn in Indiecita (which is one of those really awesome variegated colors that I pick up over and over, because it never looks the same, but it always looks gorgeous). I’ve cast on for this four times now. The first couple of times, I wasn’t happy with the needles or the fabric I was getting. Then my little one yanked the needles out, and it was easier just to start over. It’s a stockinette-based pattern, so part of my restartitis was trying to find a way to combat the curl a bit. I finally settled on working the first few rows and the last three stitches on the stockinette side in garter stitch.

This shawl begins with the longest side, and I think that’s part of why it’s been languishing in my WIP basket for so long. Most of the shawls I’ve done have you start in the top center and work down to the bottom hem. The rows get longer as you go along, but it’s so much fun to watch the lace pattern develop that I’m motivated to keep going. But a shawl that starts out on the long edge, in stockinette? Um, not so much. I told myself it was a great traveling project, but that just meant I had a good excuse to leave it in my knitting bag when I wasn’t actually traveling anywhere. As a result, my progress with this project has been pretty infinitesimal, which is a shame, because I think it’s a great combination of yarn and pattern. I did finally get around to adding a few more rows in the car on the way home and again today, as the kids and I celebrated the first official day of summer vacation by hanging out in the backyard by the kiddie pool and the sprinkler.

So I’m thinking that maybe some projects, like long, hot bike rides, need a cold beer at the finish line (or the next entrancing project) to keep me motivated. How about you?

What are you doing for World Wide Knit in Public Day this year?

As we did last year, my family is going on a bike tour tomorrow around Baltimore. I took along a pair of socks that I was working on for my husband last year, and did knit on them at the picnic after the ride. (Wish I could knit and ride at the same time!)

This year, I am planning on taking along another pair of socks: 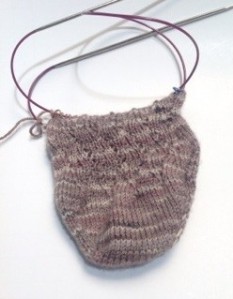 Today, though, I am working on the second baby sweater:

I redid the stripes (using the more subtle green yarn), and am now up to working the ribbed buttonband. This has been a quick, fun knit, and the yarn (KnitPicks Comfy) has been much easier on my hands than the 100% cotton I used for the Scalloped Lace Baby Sweater.

What’s on your needles right now? Are you participating in any activities for WWKIP Day?