← Crafts of another variety
Things that make me go GAH! →

I sat down on Mother’s Day, determined to work on the Stripe Study Shawl. I had purchased a raspberry-colored skein of absolutely gorgeous merino/silk laceweight at MDSW several years ago from The Flock Bransonas. (Sadly, they were not at MDSW this year, and they do not seem to have a website.) I had no project in mind when I purchased it; it was a total impulse buy. I later found some equally gorgeous yarn in a charcoal gray (from the Neighborhood Fiber Co.) that went beautifully with the raspberry yarn; it seemed to be begging to become a Stripe Study Shawl. 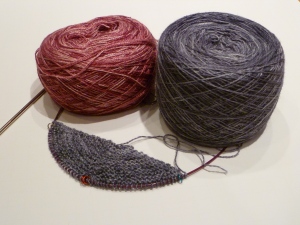 I started out on size 4 needles, planning to knit a gray shawl with pink stripes. I cast on with the gray and got about 20 rows into it. And then I set it aside in favor of other (quicker!) projects…

When I was at MDSW this year, I found some yarn to make another pattern by Veera Välimäki, the insanely popular Color Affection. But I still had the Stripe Study hanging around, so I figured I should finish that one before winding the yarn and casting on for the Color Affection shawl. (Casts a longing look at the pretty new yarn.)

I have this feeling that knitting on Mother’s Day should be somewhat selfish in nature— in other words, not baby gift knitting!— so the Stripe Study seemed like the perfect project. I read through a lot of the comments on Ravelry, and found that people were running out of the stripe color before the border color. I have almost twice as much gray yarn as pink yarn, so it made sense for me to cast on again, this time starting with pink. So I did, still using the size 4 needles (which looked fine with the gray yarn).

Even though both yarns are laceweight, the pink is clearly finer than the gray yarn. It did not look nice a springy in garter stitch; it looked rather stretched out and sloppy. So I went down to the size 2.5 needles (3mm) that she suggested for the laceweight version of the Color Affection shawl. That looked a little bit better but… well, it’s tough on my eyes and seems like a LOT of knitting for very little gain. I knit socks on size 1 needles without a hitch, and I don’t think I’d mind knitting lace patterns out of laceweight yarn, but garter stitch is supposed to be easy tv-watching knitting, and in laceweight, for me at least, it’s not.

Now I’m mulling over the idea of knitting the Stripe Study in stockinette instead of garter stitch. I don’t mind purling, and I find the German short row method (which I normally use with stockinette) to be faster and less fiddly than wrapping-and-turning (which I use with garter stitch). Hmmmmmmm. 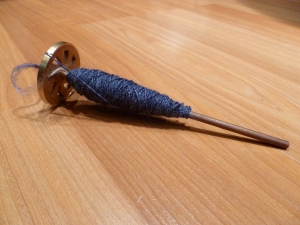 So that left me without a “selfish knitting project” on Mother’s Day, and a whole afternoon out on the patio with perfect weather to fill. I pulled out my new Golding spindle and decided to spin a bit while I mulled over the shawl situation.

Holy cow, do I love that spindle! So light and easy to spin. I got so into it, I decided to give up on knitting for the rest of the day and just spun the merino/silk fiber I’d started on my Ashford Turkish spindle. I did half the fiber on the Turkish spindle, then the second half on the Golding. The singles I got from the Golding are much finer, so as I’ve started to ply them together, I’m finding that it’s making a neat contrast in the yarn. (Plus, my spinning definitely improved as I went along, so the singles grew finer and more even as I went along.)

I’m using the heavier Turkish spindle to ply the two together. I’m about halfway through the plying. And my new Niddy Noddy just arrived, so as soon as I’m done with the plying, I can skein the whole thing, give it a nice, long soak, and have actual yarn that I can knit with. Yay!

← Crafts of another variety
Things that make me go GAH! →